We started at Tijola, we went up the road to Bayarque and then to Bacares. From Bacares we go to the mining town of Las Menas, which is an old town located in the Sierra de los Filabres, belonging to the municipality of Serón. In this place iron was extracted from the end of the 18th century until the year 1968.

In everything related to the mining activity, up to 2,900 people were able to work; Many of them did not live in Menas and had to travel every day on foot crossing the mountain from towns such as Serón, Alcóntar, or Bacares among others.

Within the Menas mining town you can see many important buildings of the era of great architectural quality, among which the Hermitage of Santa Barbara, the hospital, offices, pavilion of workers, workshops and several houses of managers and technicians.

Then we continue the route to Serón using the old road AL-5406, a little narrow and winding but has a special charm and hardly any traffic.

Talking about the talc mines is to recover part of the history of the Comarca del Almanzora. Surely the extraction of talc in our region dates from Arab times, including the Romans and Phoenicians, forerunners of all mining activity in these places.

The first documentary testimonies we have date from the nineteenth century, the first lawsuits between municipalities and individuals for the use of land and mining claims, since “soapstone hatcheries” as it communicates to talcs, were not considered within the category of minerals until by the Royal Order of April 2, 1867 said inclusion in this group, as quarries of soap and therefore with possibilities of mining claim. 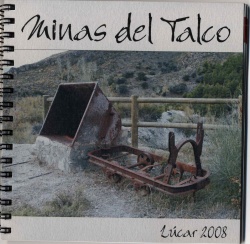 Subsequently have been exploited, initially individually by wells granted by the municipalities and landowners, and later by a company that was established for such mining, which was established in Somontín.

Between the 50s and 60s of the last century, taking into account both working and economic conditions of this mining, there was a great emigration of our people to places where working and development conditions were more attractive.

Today, the so-called Talco Mines Trail has been recovered and enabled, which runs from Lúcar to Somontín and shows the entire route in which talc was worked and the mines and / or remains of the same ones that are on this route , popular and very busy by tourists and lovers of hiking.