Planning a visit through the Moorish routes of the Almanzora Valley is to venture from town to town throughout the region, where by obvious circumstances of history, the Nazari heritage is more important than how many make up its culture, customs, traditions, monuments and archaeological remains .

The most suitable starting point is Purchena, where the king of the Moors rebelled against the corana of Castile, Abén Humeya, established in 1569 the Morisco Games in order to encourage their supporters in their struggle against Christians and reaffirm the Arab culture Andalusian In the inaugural speech proclaimed: “True to the traditions of my lineage and wanting to completely restore the customs of our elders, to celebrate this great moment in the Valley of Almanzora, Valley of Victory, I come to summon here, in Purchena, some games in the style of ancient Olympia. ” In the surroundings of Purchena and Tíjola took place the main battles of the Moorish host against the Christian, led by Don Juan de Austria, brother of the Emperor Felipe II. One of the consequences of that war was the destruction of a large part of the alcazabas, watch towers and other Moorish constructions.

From the highway, taking the detour from the A-334, you arrive at Purchena. In this locality the Moorish Games of Abén Humeya are celebrated in the month of August, recovered from 1993. Together with the athletic tests, consisting of traditional sports of the Nasrid culture, musical, gastronomic meetings, conferences and a wide range of events are celebrated. cultural events that have people from both shores of the Mediterranean as protagonists.

From Purchena you can take the road that goes up the river to get to Tíjola, another city so important in the Moorish history. In the conquest of the castle, it fought valiantly, using artillery from which the impacts caused to almost destroy this fortification are still preserved. There is historical documentation and letters from John of Austria to his brother Philip II relating the fragility of that struggle. You can climb from the Hermitage of Salvador to the upper part of La Cerrá, where Tíjola la Vieja was located, the walled area that offered protection to the ancient Moorish inhabitants.

From Tíjola, the route continues until Serón. The visit to the Castle is of special interest for lovers of history. This fortification was taken by the Moors in 1569, passing by knife to all Christians of legal age. Encircled by the Christian troops, he resisted fiercely and John of Austria himself was on the verge of dying of a stone that hit his helmet. The fortress was definitely taken after several sieges. The rectangular floor can be seen, formed by large trapezoidal cubes that are erected defense towers and viewpoint. 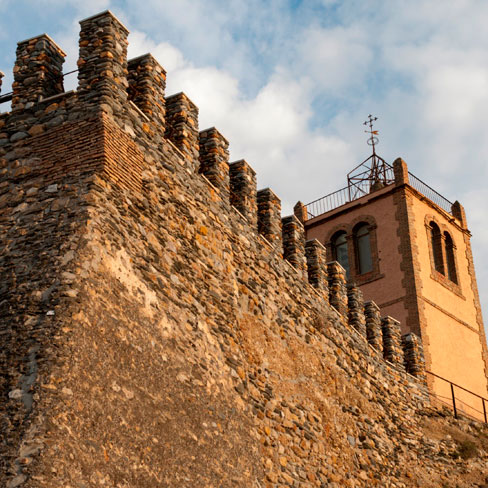 We start the route in Purchena, neuralgic center of the Moorish route, towards Olula del Río, where we will visit the ruins of the Nasrid fortress, as well as numerous vestiges, traditional Moorish houses, towers and a cistern built by the Muslims on a settlement of the Age of the Bronze

From Olula del Río you should follow the road to Cantoria. We will pass before by Fines, birthplace of the mythical character “El Tuzani”, the main character of numerous weapons facts narrated by Ginés Pérez de Hita in the History of the Civil Wars of Granada. All the remains of Moorish military buildings of Cantoria are popularly known today as “Old Place”. It is built on a hillside, surrounded by walls and defended by a solid castle located in the highest part of the hill. In the old nucleus of Muslim population, located in the right margin of the Almanzora river, a watchtower of rectangular form and made in masonry is conserved.

From Cantoria, the route continues to the  north, passing through Partaloa. We arrive in Oria, a town that also lived the Moorish rebellion of the late sixteenth century. You can visit the watchtower, the Alcazaba from which contemplate beautiful views of the town and part of the Arab baths.