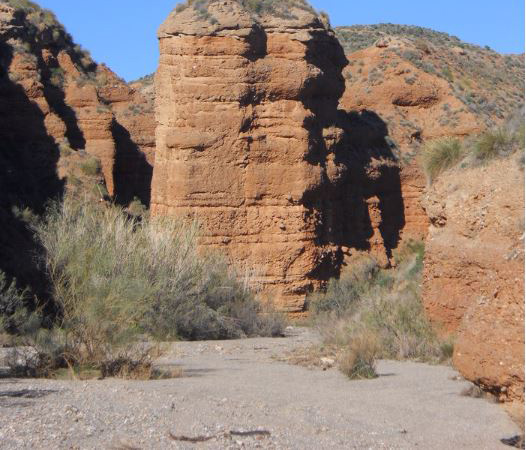 Circular footpath, very simple, of many contrasts since along the route we will pass through zones with clear semi-desert characteristics to a leafy ravine where it gives the sensation of having totally changed place.

This path will guide us to the recreational area of “Las Morras” that offers playground, barbecues, tables, drinking water, etc .; Continue to an observatory of fauna and flora totally adapted to people with disabilities and shortly before reaching Taberno we will find a botanical park where you can discover the native vegetation with detailed information even in Braille. 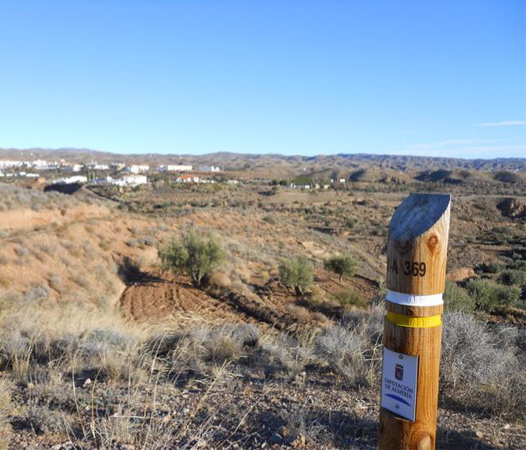 We start from the door of the Town Hall, starting the path through the Plaza Mayor de Taberno looking for the eastern part of the municipality, passing through a botanical park down to the bed of the Rambla del Aceituno. We will follow the channel until we leave the PR A-117 path at the junction of Los Mundos and continue down the Rambla until we see the Barriada de Santopétar and turn right to go to the Rambla de Canales (above called Taberno), that we will leave soon to follow by a lateral track and path. We will go to an asphalted track, which we will cover for about 800 meters to reach the Rural Complex “Sol de Taberno” through which we will pass.

We will descend to the Ravine of the Saltador, in which we will have to define the path to give continuity to the track next to ruins to start the ascent to Cerro Alto, which gives its name to the path. We will continue along dirt tracks until we reach an asphalted road through which we will continue a small stretch and descend towards the Barriada de Los Teones. From here we will go down to the Rambla de Taberno to go under the bridge of the road and ascend to get back to the town at a point very close to the town hall, thus making a circular circuit.

The itinerary does not present a big difficulty in general, although it is long and presents some steep climbs as we can see in the profile. It could be classified as medium-high difficulty

Most of the itinerary runs through dirt tracks, there is some asphalt, sections through Ramblas and two pieces of short paths.
No large differences in level are overcome
Maximum height 799 m.
Minimum height 546 m. 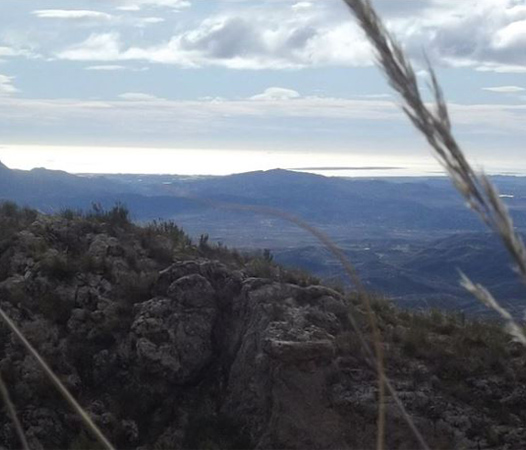 Recommendation.- The best date to make the route is at the end of February when the almond tree is in bloom.

Description of the Route.

The route begins in the recreational area of ​​”Las Morras” of Taberno, which is fully equipped with all kinds of services such as tables, chairs, barbecues, playgrounds, toilets, drinking water, shelters, etc., etc. Being this recreational area a place to see, practically together, the vast majority of trees and shrubs that can be seen in the term of Taberno.

Once we have enjoyed this area we went to the caves where “El Carborero” and his band were hiding after their attacks on the neighbors of Taberno and Albox. This cave is located in the Sierra de “Los Aguilas”, which is located to the west of the area in which we find ourselves. Although the route is short in km, we must be prepared to climb some steep slopes, but the prize will justify the effort since we will be in a strategic point to enjoy unimaginable views, having the possibility of seeing Taberno nucleus, Santopetar, Los Llanos , Albox, Huercal Overa, Mojacar, Garrucha, etc. and, as you can see in the image we offer you, the sea, in which, with a little luck, we will see the boats enjoying the climate that only Almeria can offer you all year round.

“El Carbonero” (Antonio Manchón Jimenez), Natural of Nerpio (Albacete). His criminal activity began in the spring of 1940, after escaping from the prison of Cuevas del Almanzora, with the area of ​​his attacks the municipalities of Bayarque, Tijola, Lucar, Gergal and Tabernas, areas where he had many supporters, since he was a young man those areas.

In 1941 he moved to our area, the north of Almería, where he will fight the areas of Puerto Lumbreras (Murcia), Oria, Partaloa, El contador, Huércal Overa, Albox and our municipality, Taberno, an area that was well known to his lieutenant “El Driver “thanks to his old profession as a truck driver.

During this route you will arrive next to the cave where you have found coins and a jacket button from that time, which coincides with the location that our elders placed as their base during their stay in Taberno.

In November 1941, in the area of ​​Venta del Peral, municipality of Cúllar (Granada), he died with his companion in a cave that was attacked with hand bombs by the Civil Guard, after being betrayed by an infiltrator of his gang.