The marble of Macael in the world.

From time immemorial the marble of Macael, considered as a m A land of lu

xury and majesty that supports exceptionally the passage of time, has been used by ancient civilizations, passing through the most important periods of our history to reach today.

The Phoenicians were one of the first peoples to use the Macael marble, although they did so sporadically. Proof of this are the two anthropoid sarcophagi of the S.V before Christ found in Cadiz. In addition to the Phoenicians, the Greeks also used marble in their constructions; Clear example of this we have it in the ruins of Roses and Ampurias (Gerona).

In Roman times, the quarries were of imperial property. From them they extracted the whitest and highest quality marble for works such as the Roman Theater of Mérida, the mosaics in Italica (Seville), the paleocristian tomb of Berja, the Dionisos of Chirivel, the head of Vespasian of Ecija or the Mercury of the Museum of Sevilla.

HISTORY OF OUR WORK

In Arab times, Macael marble was frequently used in his civil and religious works. Facades, capitals, baths and columns of Medina Azahara; The Cordoba’s mosque; The Alcazaba of Almeria or the Alhambra of Granada, within which it is possible to emphasize the 124 columns with their different capitals and the source that gives name to Patio of the Lions. In addition marble blocks were exported to Africa for use in multiple constructions.

In the Modern Age there was a resurgence in the sector of the extraction of the marble, being this one the favorite material for the construction of cathedrals and other architectural monuments of the time. Testimony of the use of marble in this period is found in various works such as the Royal Chapel of the Catholic Monarchs, the Palace of Charles V, the Cathedral of Granada, the Monastery of the Escorial in Madrid, the Cathedral of Seville, the Cathedral of Almería, the Castle of the Marquis de los Vélez, currently exhibited in the Metropolitan Museum of New York, the Royal Palace of Madrid or the Monument to the Coloraos of Almeria.

Passion, innovation, creativity and design together with the experience of its professionals have made Macael and its marble present a significant presence both nationally and internationally. The beauty and uniqueness of this natural stone and the know-how of the artisans of Macael are reflected in works recognized as: The Burj Al Arab Hotel in Dubai, the Presidential Summer Palace of Russia, th 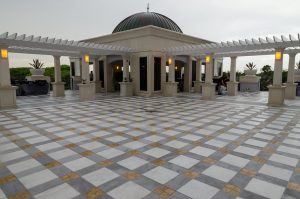 e Crowne Plaza Hotel in Indonesia, The Mandarin Oriental Hotel in Miami, the IZNK Mosaic in Dubai, the Central Library of Kansas, the Ralli Museum in Caesarea (Israel), the Mansion-Hotel Cap Estel in Nice, the Euroma de Roma Shopping Center, the Silver City Hotel in Dongguan (China), t
he So Ouest Shopping Center in Paris, the Aker Offices in Oslo, the Le Yacht Complex in Casablanca, the Barda Museum in Azerbaijan, the Obelisk Fountain in Florida,

The Barney’s building in Los Angeles, the Embrujo Banus Building or the Al-Riyad Palace of the Saudi royal house in Marbella, the replica of the Alhambra Palace in Riyadh, the Hilt 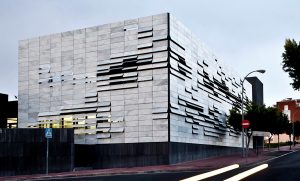 on Buenavista Hotel in Toledo, the Sorolla Center Hotel in Valencia, the Hotel Elba Carlota in Fuerteventura, the Hotel Nagari in Vigo, the Urban Hotel in Madrid, the Portobello Hotel in Roquetas de Mar, the Abama Hotel in Tenerife, the Sheraton Hotel in Bilbao
, the Villa Padierna Hotel in Marbella, the Mare Nostrum Complex in Tenerife, the Andalusian Cultural Center of Granada, the Islamic Center of Malaga, the enlargement of the facade of the Central Bank of Spain in Madrid, the rehabilitation of the Basilica of the Cristo del Gran Poder in Seville and the Teatro Victoria Eugenia , Of San Sebastián, the restoration of the Church of Santa María in Mahón in Menorca, the Airports of Barcelona or Almería, the Palace of Fairs and Congresses of Malaga, the City council of Cartagena, Archivo de Ind The Plaza del Mar in Adra, the Fuente Jado in Bilbao, the Plaza Mayor de Huercal Overa, the Monument to the Virgin of Angustias in Ayamonte or the Monument to the Constitution in Madrid, Among many other works.